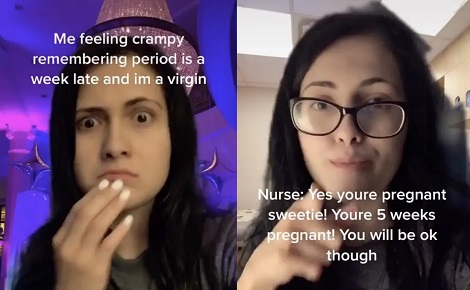 A mum says she has been dubbed “Virgin Mary” by her friends after she fell pregnant aged 19 before she ever had s.e.x.

Samantha Lynn Isabel, from Massachusetts, USA, was left stunned when she learned five years ago she was expecting a baby boy.
This was despite her never having had penetrative s.e.x with her boyfriend – but admits they had ‘fooled around’ together previously.
She said she took a pregnancy test when she suffered cramps and her period was late.
After a visit to the doctors, they confirmed she was five weeks pregnant with her son Bentley, who is now 5.
Samantha revealed her incredible story in a TikTok video which has since been viewed over 1.4million times.
“I read you can get pregnant during foreplay,” she said in the clip.
Samantha’s case is an extremely rare example of conception without penetrative s.e.x which is believed to account for just 0.5% of all pregnancies, according to a study of 7,870 women published in the British Medical Journal.
“Sperm has to get into a vagina in order for pregnancy to happen,” Dr. Lincoln told BuzzFeed.
“It doesn’t matter what puts it there — whether it’s a penis, finger, turkey baster, you name it — but once it’s there, it can travel through the cervix, into the uterus, and rendezvous with an egg in the fallopian tube and fertilise it.”
According to the NHS, the probability of getting pregnant without having s3x is “very low” but remains a possibility.
Samantha has revealed that she has accepted “being called Virgin Mary the rest of my life by my family and friends”.
The 26-year-old says she is still with her partner to whom she fell pregnant and is now the mum to second son.

Trend: Cristiano Ronaldo And His Partner Georgina Rodriguez Soak Up The Sun Onboard Their £5.5m Superyacht In St.Tropez (Photos)

Trend: Bam Bam Shows Off Bum as She Steps Out With Her Baby, Zendaya (Photo)

Trend: Miley Cyrus And Cody Simpson Split After Less Than A Year Together

Trend: Miley Cyrus Reveals She Lost Her Virginity To Liam Hemsworth At 16

Trend: You Can’t Sleep Your Way To The Top – Kiki Mordi Questions Why People Attribute Women’s Success To S3x

Trend: Cristiano Ronaldo And His Partner Georgina Rodriguez Soak Up The Sun Onboard Their £5.5m Superyacht In St.Tropez (Photos)

by A Julius Jr.
No Result
View All Result